Upland Residents Take To The Streets

Upland residents are waking up and taking to the streets to share their concern for their city. The overwhelming majority of those who talk with a concerned citizen who objects to the new General Plan, and especially the higher density housing that will add to the water crisis, are shocked when learning about the Plan. Many recognize the political philosophy of "Smart Growth" aka "Agenda 21" on which our Plan is based, when they hear the description of what the city is doing. Some comments I have heard:

"How can our elected officials not read the newspapers and identify this political agenda in our own Plan?"

"One quick Google search would have given them all the background information they need to reject this Plan. Why didn't they do any research?"

"Why didn't they question what was being presented to them? Did they ALL really LIKE THIS??"

"Planning Commission Vice-chair, Bill Velto was 'shocked' when he first heard the details of the Foothill portion of the Plan. Why isn't he fighting against it?"

Residents are shocked too. Many are fearful that Council members, who should know about this devastating concept of central planning, do not. They say that they no longer trust their elected officials or the managers of the city departments.

Additionally, they protest that they never knew anything about the workshops the City held to involve residents. They feel they have been betrayed by the Council members they elected who did not reach out to their constituents. Had they been aware, they would have not chosen the tenants of the Plan. 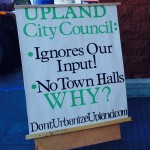 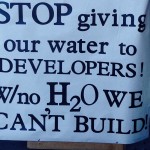 Some concerned citizens have made signs and, with permission of store owners, are engaging shoppers on their way out to give them the timely information.

When I visited with a citizen and shopper, the shopper was very grateful that the concerned citizen had taken the time to alert them to this crisis. They vowed to get involved and take this information to friends and neighbors.

JOIN US! DOWNLOAD THE CURRENT FLIER FROM THIS SITE AND SHARE IT WITH YOUR NEIGHBORS. WE NEED YOUR HELP TO SPREAD THE WORD.

How Local Government Is Usurped By Grant ...