A Pack and Stack City Testimonial...We hate it

I was out of town this last week and while traveling, drove through the town of Ogden, Utah. I was shocked when I saw a newly renovated section of this very old town. It looked just like the drawings I have seen by an Environmental Planning Company for Los Angeles - complete with the old fashioned street lamps (1890's) that are coming to be the symbol of Agenda 21 cities. (You have seen them all over Upland! They are trying to get us mentally ready to go back to a time without cars!) 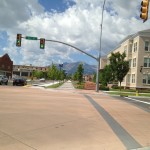 Two car lanes were removed to add a protected bike lane and large sidewalk. Look at the widths!!

A more than four lane road had been reduced to two lanes, one in each direction. Then a separate bike lane had been constructed -curbs on both sides. It too, had a median with plantings. Then next to the bike lane was another area of grass and trees next to an extra wide sidewalk.

I imagined that this most likely, was a four lane highway with parking. A four story apartment building was at the edge of the sidewalk. More apartment buildings lined the four or so blocks that I could see - some only 8 feet from the curb.

As I turned to take some more photos, a small car made a right turn and got confused and thought the bike lane was a car lane. It got wedged in the bike lane and had to back out. Upland residents were mocked by the Planning Commission for not knowing how to navigate our access roads. Well, let me tell you by being an eye-witness, separate bike lanes will be 100% worse!! Keep our access roads. 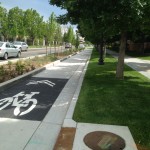 I stopped a citizen walking by and asked what he thought of this new street plan. "We hate it," he cried. "The traffic on this street at peak hours is terrible." He told us to ask police and firefighters about the newly configured streets. "They hate it too - they can't even get in the narrow area and when they can the trucks and police cars block the entire street including the bike lanes."He admonished me to go and look at 25th street, their "historic downtown. He said, "That [renovation] didn't work either."

I drove to their old town and it looked just like Upland's Downtown except apartments had been built above the old stores. Parking was similar to Upland and there were those 1890's street lamps. I noticed that the kinds of shops were not the kind most folks would support - a bar, adult theater and a tattoo parlor amongst similar establishments.

My next stop was to the center of town - newer buildings indicated they had tried to upgrade. As I turned into the area they call "the Junction" I couldn't believe my eyes - behind the main street businesses, lots and lots of "pack and stacks". The sidewalks were very narrow with some streets 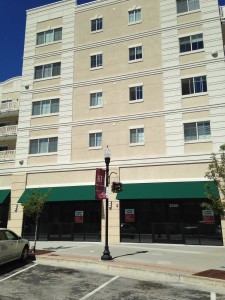 Five level pack and stack. Look, all the retail on the bottom floor is vacant.

allowing for parking in front of apartments. The two-lane streets were very narrow too. Store after store had "for lease" signs in the windows. And there were those ugly 1890 street lamps again. The narrow winding rows of shops and apartments made me feel bad for those who lived there - some finding these the only "affordable" housing they could get. What a life - no small yard with grass and flowers, noisy streets just outside your front door and no room for friends to park who drop by.

I have included some photos of what I saw (browse through them, they're at the top of this post). Don't be deceived!! The architecture is quite nice and everything is clean and new. But remember what the objective of this development is - to pack people into a small area near public transportation with retail stores below. Live - work - shop - bike - walk - bus. Never leave your area unless you take the bus or train.

So Mr. Zwack, Development Services Director, was RIGHT! The plan developed for Upland IS "being implemented nationally." It is not right for Upland. The people of Ogden don't like it either.

Stop the plan. Rewrite the plan to reflect our values.

Urgent: Send Emails Prior To The City ...