When residents arrived at last night's Planning Commission meeting, lo and behold, someone who really wants the General Plan passed "as is", had called in the "Purple Shirts". If you have ever payed attention to National elections, these are the SEIU union members who are called in to prop up union and other anti-american progressive agendas. We had a feeling that the City Hall'ers and their lackeys would try to "Stuff" the meeting with people who supposedly supported the plan (all of which, haven't even read it). We just never imagined they would "Stoop" to out-of-town and Illegal Alien union members. 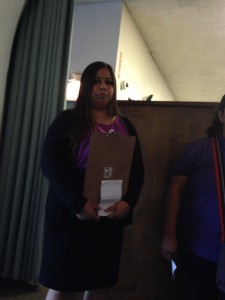 When the SEIU union members arrived at "OUR" City Hall, they had to check in (there was a lady in charge holding a clipboard) and get their speaking assignments. A couple Upland residents spoke to several of them and asked them what they were doing here (at the Planning Commission meeting). One responded by saying, "I'm supporting my Union". Several others that were asked the same question tried to respond but couldn't (they didn't speak English). Another was asked if she lived in Upland and after a really long awkward pause, muttered "Upland".

When it became time to address the Commission only those that could speak enough English were assigned to talk (they don't want to tip off the crowd). A couple SEIU speakers claimed they lived in Upland, but the others admitted that the bulk of the group were from San Bernardino and that one was from Fontana. Each "Plant" that spoke was given a specific point to make about the General Plan that the Planning Department could easily refute like hitting a slow moving softball at a family picnic. It was pathetic. We even got one of the speakers' assignment post-it-notes as a souvenir!

I wonder who fed them specific points from our General Plan? Since some of them did not even speak "English" (they can't read the plan)...we can rule them out. Who then? Well, did you know that almost all City of Upland employees are unionized? Who are they unionized against? I'll give you a hint...it's the same people that fund their paychecks and pensions. Can you imagine an "Employee" from the City of Upland who is supposed to be working for you (who you pay), calling the SEIU to send union members to your town to fight "You" against "Your" opposition to "Your" City's General Plan. Unbelievable. I thought this kind of corruption only happened in Chicago, New York, and New Jersey. Not in Upland!

Can you comprehend how serious this action is?...That the residents of Upland have become such an enemy to whoever wants this General Plan passed, that someone in or close to City Hall would throw up a red flare to "Sick" union members on the residents? This was a very sad and low moment for Upland!

Having a special interest union group that does not espouse or support constitutional values try to interfere in your city's affairs is bad enough. WHEN ILLEGAL ALIENS FROM A FOREIGN COUNTRY ATTEND YOUR PLANNING COMMISSION MEETINGS IN AN ATTEMPT TO ALTER OR INFLUENCE YOUR CITY'S FUTURE...YOU'RE IN BIG TROUBLE!!

If Illegal Alien SEIU members want and support passing the General Plan as is...that tells you everything you need to know!

Here is a brief article about SEIU and other unions wooing illegal immigrants (read here).

Bonus Points: Google the words "Illegal Immigrant SEIU" or really any related word combination. Have fun! and remember...we got here by voting for the wrong people over and over!